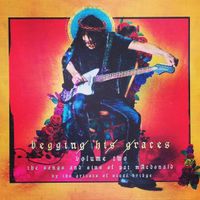 From the recording BEGGING HIS GRACES: THE SONGS AND SINS OF PAT MACDONALD / VOLUME TWO (2016)